DES MOINES, IA – Des Moines has acquired Forward Kristof Papp (2001), a 2020 Phase I Fifth Round Draft Pick and a 2021 Phase II Sixth Round Draft Pick from the Madison Capitols in exchange for Forward Patrick Schmiedlin (2002) and Goaltender Christian Stoever (2000).

“We would like to thank Christian and Patrick for their time with our organization,” GM Tom Mannino said. “These are always difficult trades to make as both are excellent young men with very bright futures ahead of them. They both showed up to work every day and we thank them for their dedication.”

“We are pleased to welcome Kristof to the Buccaneers' family. Papp is someone we have liked since his time playing AAA hockey for Honeybaked," Mannino said. "He is a premier player in our league. Kristof has the ability to make plays, score goals and compete with grit. He brings the right character and leadership qualities we look for. Adding Papp will bring an immediate impact to our team, while the addition of the draft selections will help us sustain success moving forward."

The Michigan State commit is in his first year of eligibility for the NHL Draft and is currently listed on NHL Central Scouting’s Players to Watch list along with teammates Matt Choupani, Noah Ellis, Alex Laferriere and Timothy Lovell.

Papp has spent time over the past three seasons representing his home country of Hungary at multiple International competitions. In 2018-2019 at the U20 World Junior Championship he led Team Hungary with six goals and one assist in five games. So far this season with the Madison Capitols, Papp has scored ten goals and nine assists for 19 points in 21 games putting himself in the top 20 scorers in the USHL, joining fellow Bucs Alex Laferriere (21 points) and Joey Strada (20 points.)

“Kristof has proven himself to be a top point producer in our league,” Mannino said. “We are excited for his development under Head Coach Peter Mannino and our coaching staff. We feel that this move brings us one step closer to returning the Clark Cup back to Des Moines and our amazing Buccaneers fans and family.”

Des Moines prepares for their first matchups of the season with Sioux City this weekend, as they’ll duel the Musketeers both Friday and Saturday night at home. Puck drops tonight at 7:05pm at Buccaneer Arena! 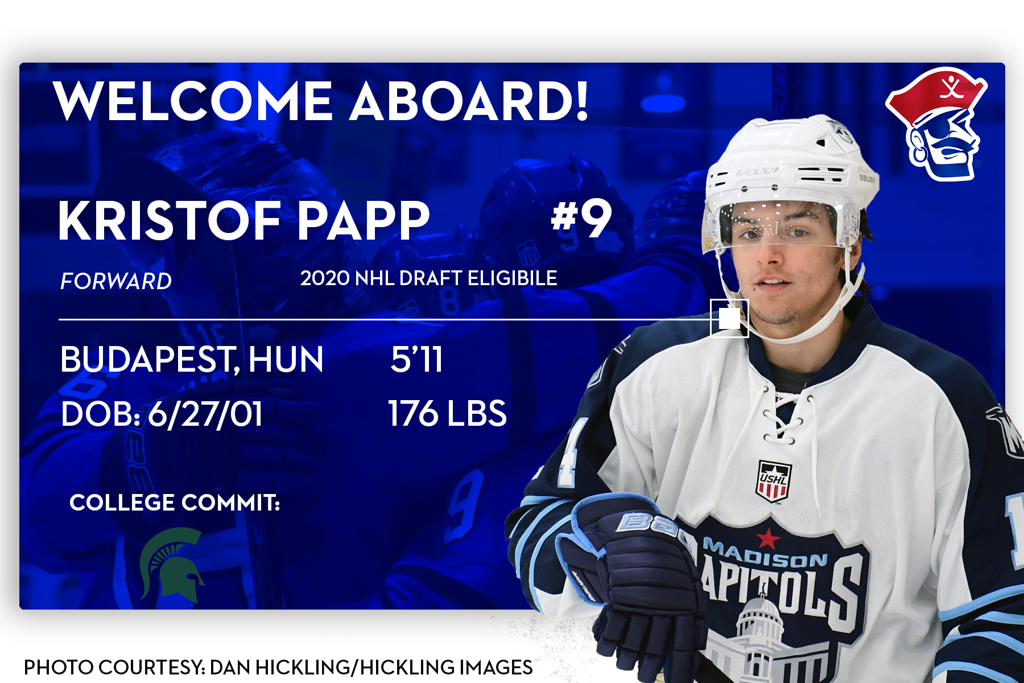